Calling All Athletes - Stop Your Stretching!

As you all know by now I'm big on the science of exercise. (I like to say The Science).

Recently I came across this paper on stretching given to me by our master instructor Eugene Thong. I strongly believe that all coaches, trainers and especially power athletes should read it.

"The chief function of tendon structures is to transfer force produced by the contractile component to the joint and/or bone connected in series. A stiff tendon will be advantageous for performing brisk, accurate movements because it affects rapid tension changes (20). Inversely, if stretching has the effect of changing tendon structures to be more compliant, it will lead to a lower rate of force production and/or a delay of muscle activation."

Yet, all you see on TV and on the field are athletes (who need to perform brisk, quick and rapid movements) stretching - sometimes for an hour or more.

What this study found was that the tendon, not the muscle, experienced lowered viscosity and greater extendibility from stretching. The researchers stated that:

"From the standpoint of preventing athletic injuries, however, we can say that stretching and the subsequent decrease in stiffness diminish the imposed load across the muscle-tendon junction during rapid movements."

They imply here that stretching reduces the chance of injury. I beg to differ. The tendons are the anchors of the muscle to the bone. It's probably not a good idea to make your anchors looser and less compliant.  Though it might diminish the imposed load, at what cost? (And I don't see how this is possible anyway - the load is the load). A tendon is roughly 400% stronger than the muscle it is attached to (according to the info at the BODIES exhibition). 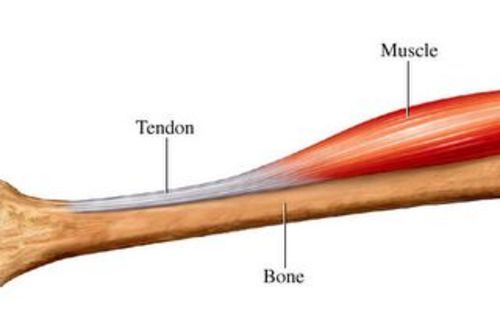 They are strengthened with proper weight training techniques using heavy loads for lower repetition times. I say that causing a tendon to be more compliant increases risk of injury! (See my blog post My Achin' Yanks)

Something to think about if you're an athlete.