If...you are eating crap and getting fatter and you start eating more crap, you'll get even fatter.

If...you are eating really well and becoming leaner and you start eating more (of all the right stuff), you'll stop getting leaner and get fatter.

This is how calories count.

Eating more or less calories is not the mechanism by which we get fatter or leaner.

FACT: You can eat the same amount of calories and by altering how much fat, protein or carbohydrate you eat, you can lose fat, gain fat or stall fat loss. Same total calorie intake, but because the combination of foods affects our hormones differently, the response (fat loss, fat gain, energy output, etc.) will be different.

Take a look at this graphic, created by and graciously lent to me by Dr. Richard Feinman, professor of cellular biology at SUNY Downstate Medical School. He uses this slide to teach medical students nutrition: 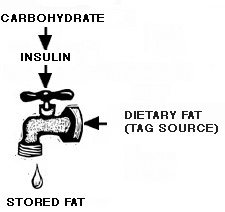 (NOTE: You don't get to have an opinion on this by the way. There are some things that are known in nutritional science and the above is several of them.)

So even when your carb intake is low (which keeps insulin low) which makes it harder to store fat, if you eat more than you were eating before you might stall your fat loss and even increase your fat stores.  After all, the extra has to go somewhere.

Remember, excess caloric intake is not a mechanism by which fat is stored. But more energy in can and will contribute to how the mechanisms are affected, resulting in excess fat storage.

So, as the saying goes, too much of even a good thing can be "bad."