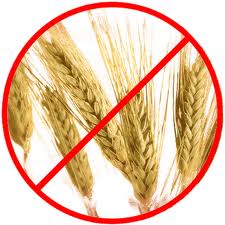 Listen closely to what Bill Davis M.D. is saying (and try not to listen to Oz).

What isn't said well on this Dr. Oz episode is that wheat is pervasive. It is put in foods you'd never realize like soy sauce, creamed spinach, french onion soups made with beer, french fries (to make them brown and crispy), some sushi rice, and many, many other foods that you'd never think would have it included. You have to read labels and ask your service person. So when eating out, ask and ask until you are certain.

I once asked a waitress if there was flour in a certain dressing used in a salad I wanted to order. She said "Nope, no flour." I said "Are you certain?" She said "Yep, there's no flour in the dressing sir." I said "Really, looks sort of thick and rich. Are you positive there isn't any in it?" She said "They don't put flour in the dressing sir." I said "That's cool. Looks delish. Hard to believe there isn't any in this dressing. Well, do me a favor would you - could you go back and ask the chef?" "Sure." she said.

There was flour in it alright.

The moral: Don't take no for an answer at first blush. Insist.

Now, just because you eat bread and cake and your head is still affixed to your shoulders doesn't mean you are not being adversely affected. Everyone is adversely affected by, as Dr. Davis calls it "Frankenwheat." You can't see or feel the harmful effects of cigarette smoke, but harmful it is to everyone who lights up and puffs away.

You'll thank Dr. Davis later. I promise you. Removing wheat and other grains completely cured my chest/facial eczema. Removing all grain cured my GERD and greatly improved my gut irritability.

It did not, however, grow my hair back, nor did it rid me of back hair. But hey - ya can't have everything.