As a child growing up in Queens, NYC, I was made fun of from time to time for several reasons - for being Jewish, for being red-headed, for being painfully skinny, for having the name Fred, and for being severely bow-legged. "Where's your horse red Fred Hahn?!" the kids would tease.

Take a look at my legs. This picture is real and NOT exaggerated: 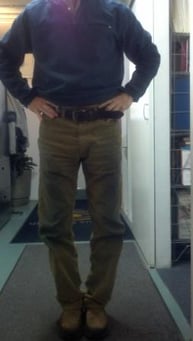 This teasing is the main reason why I got into weight lifting.

My grade school pal Danny Dray was the one who got me totally into it. Actually, it was his biceps - he had a huge biceps muscle at 11 years old. It was so large it was larger than the cop who patrolled Juniper Valley Park - the park that we both walked across together to get to Hebrew School every day from PS 49 in Queens, NYC.

Training in his basement was fun and soon I wanted my own set of barbells and a bench. My dad bought me some and I used them nearly everyday. It was one of those old time, concrete filled,  weight sets that lasted me through high school. Something like these:

I bought all the magazines, followed the routines of the body builders and joined the Charles Atlas Club.  Take a look-see: 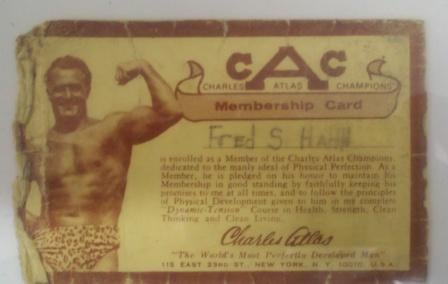 As the years rolled on, I dove into Nautilus training and really got into body building. As far as I was concerned, the more muscle I could pack on the better. But one thing really bothered me - my legs. No matter what I did I could never pack on the mass on my legs.

Here's a shot of my legs when I was living in Israel on A kibbutz after having just wrestled in high school, squatted with many barbells, tortured myself at Nautilus training centers, praying to God (yes I was religious at the time), and doing anything else I could think of to give me thick, powerful looking legs:

Yep, that's about as big as I could get them.

Now, I was taught by the works of Dr. Ellington Darden, Arthur Jones, Mike Mentzer and many other HIT enthusiasts as well as by the mainstream mags that genetics dictate your ultimate size potential. I knew that I had ectopmorphish (skinny) thighs and would probably never have thighs like this: 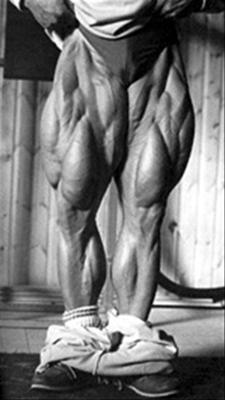 Did I want thighs this large? Well, yeah, but no - not really. More like this would be nice:

At 29 years of age, I was working in Aruba as a production manager for the Alhambra Casino. The work was at night so I had all day to weight train, sun bathe and run on the beach. My legs got a bit better, but not much: 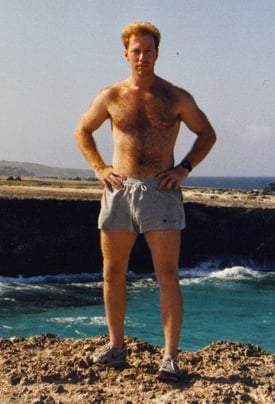 So as I said, nothing I did really worked as I wanted it to. The best I was ever able to achieve was by using my Slow Burn method, training legs twice a week, using a combo of exercises and deeply fatiguing them at each session which is pretty much like torture. They have gotten a bit better since but not a whole lot.

And now I know why!

Many of you know that I suffer from terrible medial knee arthritis due to my bowed legs, 20+ years of martial arts, running, jogging, etc. I've visited many doctors who have all told me that my knees are shot. Last week I went to visit a surgeon who, as he sat me on the table, asked me to straighten my knee.  I told him the only reason why I could completely straighten it today was I had taken a pain killer a few hours ago.

He looked at me oddly and said "Your knee isn't straight, far from it." He took out his joint protractor called a goiniometer, and measured. Lo and behold my knee was almost 6 degrees from full extension. I told him that as far as I could tell, this was as straight as my knee has ever gotten - for years now.

One thing that has really bothered me about all this was that the little mass I did have in my legs has dwindled. It was hard enough for me to build what I had but to lose even a fraction of it really bites.  Take a look: 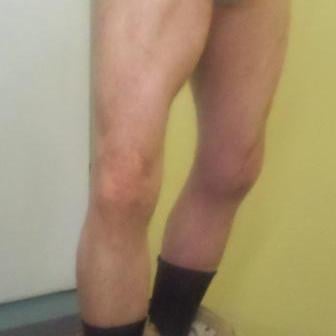 The doctor went on to say that as the disease progresses I'll lose more and more extension so I can expect even more muscle loss until I get the partial knee resurfacing even though I'm strength training. What he will do is fix the bowed bone and bring it completely straight being careful to compensate for the soft tissue.

I asked him point blank if my poor leg genetics (bowed legs) was the reason why after all the years of trying I could never develop big, powerful looking thighs. His reply was swift and sure - "Yep." he said. "Unless your legs functions normally, and yours are quite abnormal, there is no way to fully develop the muscles attached." He also told me that once both knees are fixed I can go back to my intense training and I'll probably be able to build the most muscular legs I've ever had. Muscular music to my ears!

So not only do your genetics matter even if you have full and proper function of a joint, when that same joint is compromised, you don't have a hope in heck of realizing your full potential. After all these years I now understand!