My Low Carb Diet is Killing My Thyroid. I Need Me Some Starch! 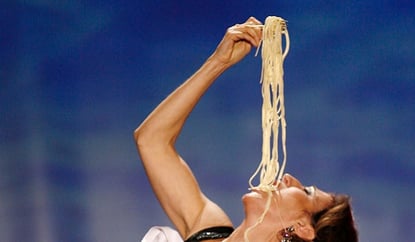 Here's my 2 cents worth of thought on the issue: No it's not and no you don't. What may be "killing" your thyroid is a poorly formulated low carb diet - just like any poorly formulated diet might. But it ain't the lack of starch, as starch is non essential to human life. The lack of what you don't require can't make you deathly ill.

Whenever I respond in this way to internet folks who vehemently proclaim that their low carb diet is turning them into a shivering, balding, lustless, thyroid wilting pile of goo, their answer is always "Oh - so it's my fault is it? I eat a pound of bacon three times a day without even looking at a vegetable just like the experts told me to and you say it's all MY fault!?"

Well, yeah - that's right. It is your fault. It's your fault for misinterpreting the experts since not a single low carb expert has ever suggested not to eat any vegetables. It's your fault that you did not check to see if the diet you undertook contained all the nutrients you require. So yes, it's all your fault. Who else's is it?

Now, let's explore this a bit deeper. Come with me on a journey of poorly formulated ideas and misconstrued malignings about low carb diets. I want to try and clarify these misunderstandings so you can hold your bacon high and gobble that ground beef without worrying that your thyroid will shrivel and die. Here we go...

So, what would cause a person's thyroid to go haywire? Could reducing the amount of sugar one eats cause harm? How could the thyroid be harmed by not flooding the bloodstream with gobs of glucose? Here's what one person said on an online forum when I asked her what she was eating when she adopted a low carb diet:

Well, I'm not eating a low carb diet now because I realized how dumb it was, for me at least. But what I used to eat was: 3 eggs fried in butter sometimes with bulletproof coffee. A pound of ground beef with cheese. a pound of bacon or chicken and pork rinds. Steak (12 to 16 oz) with butter and more cheese (1 to 2 ounces). 3 days a week I also had berries with a 1/4 cup of heavy cream. I also frequently had bacon with breakfast too, just not always.

Others like her said the LC diet made them ravenous - so much so they had to eat as much as ~4500 cals a day at a height of to reach satiety. They often complain their hair was falling out, no sex drive, being cold all the time and told by thier doctors that their thyroid is whacked.

Not too shabby. Vitamin A is on the low side but this could be easily rectified by eating a mere ounce of liver a few times a week. Vitamin A (found primarily in animal fats) helps the body absorb iodine. Ground beef's not so bad either for all these nutrients but like bacon is low in vitamin A - only 6.4 mcg.

Speaking of iodine, according to this nutrition counter, bacon has 3.0 micrograms (mcg). This may be because bacon is usually cured with salt. That said, 100 grams of unsalted ground beef has 4.2 mcg so maybe not. The NIH says adults require about 150 mcg daily. A 175 gram or 6 oz burger would only zap you with 10 mcg.

Remember that one person said she ate 450 grams (a pound) of beef for breakfast. That's roughly 18mcg of iodine alone. She also ate cheese. Much to my surprise, cheese is rife with iodine. A mere 100gms or 3.5 ounces has a whopping 95mcg. Now, that's a lot of cheese mind you. A thick slice of burger cheese is about one ounce.

But she was pounding down the calories so I think it's fair to assume the was eating the equivalent of three slices. So if you add up her total iodine intake over three meals a day totaling ~4500 calories, she is getting close to or all the iodine she needs. But I must say this - I highly doubt that she was eating this much food.

I am not calling her a liar mind you. I think she just needs a new abacus.

My wife makes a very good point in saying that most people who want to lose fat are not eating as much food (or even close) as Sara on a LC diet. And they are not eating much if any processed foods. This might result in a micronutrient deficiency unless you're eating adequate vegetables on a low carb, paleo diet.

So for those of you who are on a VLCD and might be experiencing health problems, make sure you incorporate veggies into your meals like a nice mixed salad and a variety of other non-starchy veggies to make up for the possible shortfall in nutrients from eating muscle meat alone. It's probably a good idea to include a variety of sea veggies too. It isn't the low carb diet per se that's hurting you (lack of starch and sugar) - it's possible a shortfall of essential micronutrients.

And there are several experts like Dr. William Davis and Dr. Eric Westman who explain that sometimes when you alter your diet for the better, hormones need a bit of time to re-regulate themselves.  So even though you might see changes that appear negative after adopting a low sugar, higher fat diet, they are short lived. And all of the RCT studies show that LCD are the go to diets for improving health and metabolic syndrome.

Food for thought at least.