Anthony Colpo, the vitriolic Australian personal trainer and author of a pretty decent book The Great Cholesterol Con is at it once again. He read a Slow Burn bashing review written by two young men who wrote a weight loss book called S.P.E.E.D: The Only Weight Loss Book Worth Reading and blogged on it with his usual flair for colorful language, metaphors, exaggerations and lies. Of course, the blog isn't at all informative - it's just rude and derisive. He's so gleeful that some other people joined his hate Fred Hahn and/or Slow Burn Club he rushed to post all about it.

Why he would take the time to write about me (yet again) in such a derogatory and ad hominem fashion is beyond me. He clearly has a fondness for me - since the opposite of liking someone is indifference towards them. And as you can tell from his blog post, indifferent towards me he is not.

And if you noticed, the comments section is closed for the blog he wrote deriding me. But the truth is the comments were never open in the first place. And why? I'll venture a guess - he hasn't got the guts to open the blog up for comments because he knows he can't take the heat he'd get. He's like that bully in the schoolyard who could dish it out but when pushed back, cried and ran away.

when (Brian) Johnson pointed out Fred’s pitiful physical development...heaven forbid he ever consider that...maybe his training methods just plain suck.To help Fred understand just why his training methods are so terrible, and why they are stopping him from achieving a decent physique,...That would explain why the authors themselves are such flagship specimens for the program.

We'll get to the ad hominem nature of these statements in a sec.

Actually, Brian Johnston, an expert in the field of strength training and someone with an impressive physique (more so than Colpo's) never once ridiculed mine. Though we've had our differences, he has never stooped to that level with me. Not that I ever saw at least.

Now, when you go around making false and empty statements about a dudes physique, you're messing with his ego. This was done by design of course to get my goat. I should just ignore it. But, you know, to heck with it - I'm going to speak out on my own behalf (one of my favorite movies is The American President where Michael Douglass gives Richard Dreyfuss a solid tongue lashing) on this not just because Colpo prodded me, but also because many people in the strength and conditioning field also make such statements about people who train in a high intensity manner using challenging weights and slow reps. 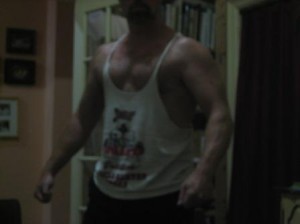 Here's a side shot getting ready to do a shoulder shrug exercise that has better lighting.

Here is a video of me performing the exercise in the photo. I'd say my back, shoulders and arms are fairly "meaty."

Again, I put these pix up to put and end to Colpo's (and anyone else's) lies about me not being in shape or that Slow Burn or slow rep training in a HIT manner "sucks." Could I be in better shape? Sure, if I chose to. I could eat a bit better, forgo wine and spirits, count my calories like a metabolic miser, lose mass and get leaner. Could I be more muscular than I am now? Maybe - but not much I should think.

People like Colpo need to be exposed for what they are - liars who will say anything to make someone they don't like look bad. Sometimes it's best to let things like this go - sometimes not. Sure, we all have had our weak moments and said things that we probably shouldn't have about other people. If we are normal however, we regret it and try to better ourselves - not do it over and over again. This sort of ongoing childish vitriol by Colpo is truly disgusting and I feel requires exposure.

Here's a pic of Colpo. Lean to be sure.

One more of me while we are at it for good measure.

And another added on the same day. This is me and a steroid taking body builder: 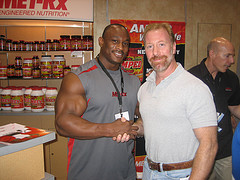 How much time per week do I spend under the iron using my useless and "sucky" exercise protocol? About 20 minutes. As far as I am aware, Colpo spends thrice that amount of time training.