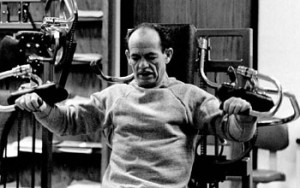 (Arthur Jones circa 1960 on his Nautilus shoulder lateral raise/overhead press combo piece. A shoulder killer if ever there was one.)

As many of you know, I have been an advocate of high intensity training (HIT) for many years. But I wasn't always one.

It all started in the early 1980's when I happened to walk into a gym in Verona New Jersey called Powerflex Nautilus. In it were a vast array of giant blue machines that looked like prehistoric torture devices.

The workouts I had at this chamber of pain and torture are unforgettable. My muscles grew faster and stronger in a few weeks doing a 20 minute workout, twice a week than they had in the few years with free weights using Arnold's advice of nearly everyday, hour long, multiple set training sessions.

Here I am at about 16 after a few weeks of Nautilus training (note that I was a skinny, ectomorphish kid):

I loved my new muscles (and so did the girls) and from then on I was hooked - I became a HITer.

As the years rolled on, I read everything on the subject I could get my hands on. I became a brain on the subject as best as I knew how. But after a few years of training using HIT, I was still unsatisfied with my physique - envying those who were far more mesomorphic than I was. Mesomorphs are people who have a stocky, naturally muscled body even without weight training (here is an example of the three different somatoypes): 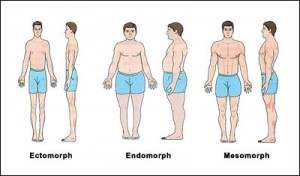 What I didn't know then was that no matter what I did I could not have a densely muscled, thick boned, stocky and powerful build. Asking the body builders in the gyms I frequented what I should do to get bowling ball shoulders and a neck as thick as a telephone pole, I went back to training using high volume, free weight, multiple set workouts. I didn't get worse results, but they sure weren't any better. And I had a lot more joint pain and muscle discomfort. And of course, I never, ever considered using drugs.

I had come to realize that after a certain point in training, genetics dictate your physique. Reality set in. So I went back to my HIT training and have continued to train clients and myself using HIT ever since. It works and works more effectively and efficiently than any other form of resistance training.

Back to Arthur Jones. A recent paper By Dave Smith and Stewart Bruce-Low took a look at all of the available scientific evidence on weight training to see if in fact Arthur Jones' opinions and declarations about resistance training were correct. What they discovered was that for the most part he was. In sum, research indicates that the best way to perform resistance training is as follows:

Arthur Jones had been saying this for several decades. And no - this was not said to sell his new machines as he advocated this regimen of training for the use of free weights or any other type of resistance training equipment. So for all you AJ naysayers out there, take a good read of this very well done paper and perhaps give HIT training a go.

The research used in the Smith-Low analysis was part of what Drs. Eades and I used (as well as our practical experiences as health professionals) to formulate our ideas for our book <a href="The Slow Burn Fitness Revolution: The Slow Motion Exercise That Will Change Your Body in 30 Minutes a Week

My friend Tim Ferris personally experienced the vast physical benefits of Arthur Jones' insights gaining 34 pounds of muscle in 4 weeks. Yes, diet plays a big factor in gaining this much muscle in such a short time. Still, without the training no muscle would have been built at all. And I have yet to read a study that produced results like Tim's using a conventional body building approach.

Recently a couple of exercise physiologists ripped into our book claiming we made fraudulent statements, told lies and bashed and trashed various forms of physical activities. Here's an excerpt:

The book makes extraordinary claims...trashes other forms of exercise and activities like running, golfing, skiing, tennis, raquetball, and basketball...

I don't think we mentioned most of these sports in our book at all let alone bashed them.

The rhetoric they use in their review is shameful. It's a long winded, snarky, lie-filled review that is an embarrassment to the field. They implied we were trying to hoodwink people into buying into our philosophy by making up facts - a philosophy that isn't ours in the first place. It's a training philosophy that strength and fitness enthusiasts have used for decades. How absurd is this idea anyway? As if we'd put our reputations and careers on the line for a book.

One of the authors, Jeff Thiboutot, is apparently not only unaware of the scientific literature on the subject (Jeff admitted to reading the Bruce-Low paper just a few weeks ago), but in writing their rude and lie-filled diatribe, they throw stones while living in a glass house. But I don't have the desire to do to their book what they did to mine, albeit without resorting to strawman arguments, logical fallacies, lies and the other nonsense they used to discredit our book and our characters.

For example, in their review they said:

I agree weight training will build muscle better than aerobics (possibly not for maintenance, however)

Here they suggest that aerobic exercise is better than weight training for maintaining muscle mass. I hate to tell you this guys but that is an absurd statement if ever there was one - one that is completely unsupportable.

Arthur Jones was a pioneer of the fitness industry and truth be told, the industry exists in large part because of him. More and more research is coming out that supports the less is more approach to resistance training and the fact that resistance training is the only form of exercise you need to obtain the benefits that exercise can bestow. Jack LaLanne was certainly a fitness pioneer in many ways, but comparatively speaking, he was no match for Arthur's intellect on training. 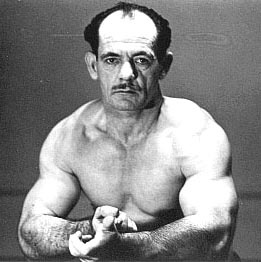