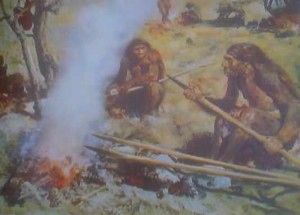 And contrary to a new discovery published in the Proceedings of the National Academy of Sciences journal last Monday, prehistoric man never lived on it at all.

As I see it, the grain advocates are getting really sneaky now. A recent article declared that prehistoric man ate "bread." But was it really bread? Let's see what the researchers found:

The findings, published in the Proceedings of the National Academy of Sciences (PNAS) journal on Monday, indicate that Palaeolithic Europeans ground down plant roots similar to potatoes to make flour, which was later whisked into dough.

Ahhh...they used plant roots, not grain. In other words, these prehistoric people ate paleo-potato pancakes not Mesozoic-multi grain bread. (Note: I know that the Mesozoic Era ocured long before 30,000 years ago but I used the word because it sounded good.)

How very sneaky on the part of the reporter to title the article: Bread was around 30,000 years ago. For shame, Ms. Goh, for shame. (Oddly enough, she was at one time an intern for a company called Potato Productions.) Might the reporter now be working for Conagra? Oh, c'mon, I kid Ms. Goh.

But more than this, who says they made food out of the rooty stuff they ground down to a paste using stone grinding tools? Says Ms. Goh:

Starch grains found on 30,000-year-old grinding stones suggest that prehistoric man may have dined on an early form of flat bread, contrary to his popular image as primarily a meat-eater.

While it is a distinct possibility that they ate the starchy mess, it is also just as possible that they used the ground up goo for other things such as adhesive, body talc, hair stiffener or as an aid to making cloth or to stiffen hides, etc.

According to Regina Wilshire:

History is filled with uses for various starchy roots other than food, yet in this instance, we're told, sans any real evidence other than the existence of the hand-sized grinding stone and starchy residue, that it was used to make bread.

And let's not forget the many medicinal substances that early Jane and Joe ground root substances into like tumeric and licorice.

So before you go on a bread binge because some article tells you that Oog and Og were pita bread eaters, know that no one has yet proven that our paleolithic brothers and sisters ate pannini.

Keep your diet paleo my friends and that means no grains. "No grain, no pain."