Got a Fatty Liver? 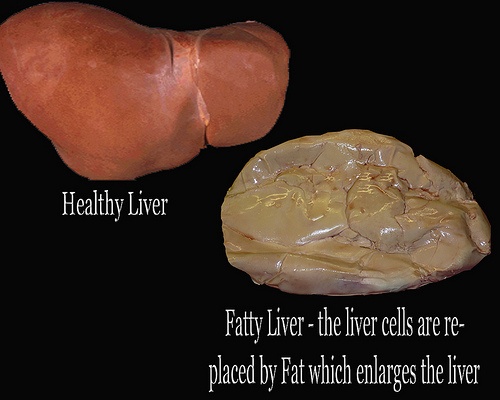 As we all know, many people today suffer from obesity. For many obese people, one of the common ailments that comes along for the ride is a fatty liver.

An overly fatty liver (greater than 10%) can be problematic. Your liver performs many important tasks and thus needs to be in tip-top shape in order to clear the blood of toxins, produce glucose, bile acids and a bunch of other very important functions. So eating and drinking in a manner that fattens of the liver is unwise to say the least.

Most people know that you can make your liver fatty by drinking excessive amounts of alcohol. This may be in part due to a lack of choline in the diet and/or from poor absorption of nutrients caused by tipping the bottle too much and too often. Many alcoholics eat poorly and experience poor digestion since alcohol can damage the gut and stomach lining as well as upset the balance of good bacteria in the gut biome. But a fatty liver may also be caused by excess fructose consumption and excessive refined carbohydrate intake - a condition known as non-alcoholic, fatty liver disease (NAFLD).

A study done in 2011, Short-term weight loss and hepatic triglyceride reduction: evidence of a metabolic advantage with dietary carbohydrate restriction concluded the following:

2 wk of dietary intervention resulting in a reduction in body weight of ≈4.3% reduced the hepatic triglyceride content by ≈42% in subjects with a clinical diagnosis of NAFLD. However, dietary carbohydrate restriction was significantly more effective at reducing liver triglycerides than was calorie restriction.

Though losing body weight was part of the cure for a fatty liver, the diet involved seemed to be even more important.

Chris Masterjohn thinks otherwise. Chris knows his stuff and I agree with him that this particular study isn't as strong as it could be. Yet, if you had to opt for one or the other approach, which would you choose?

Ever wonder why olde time taverns used to have eggs and pickles at the bar? Well, now you know!