Lies the Vegans Tell You 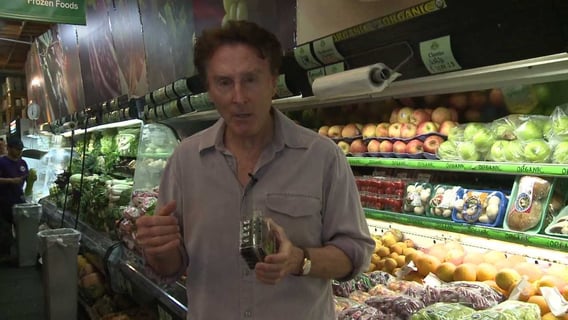 I'm battling a teeny cold this week and decided to nip it in the bud by drinking a tall glass of green vitamin filled liquid veggie juice. I loathe the stuff but I thought it would do me some good.

The best place to get such a potion near where my gym is located is at Gary Null's Whole Foods market on Broadway and 88th street. So off I went.

As I was walking up Broadway I came upon the giant gold-colored, wind-fluttering Gary Null banner. (His offices are on Broadway and 82nd street.)

Not a second later a taxi pulls up to the curb and Gary Null himself emerges. My first thought was "What a freaking coincidence!" My second thought was "Wow - he doesn't look very healthy." For those who don't know of him, Gary Null is a vegan/vegetarian health guru. Now, I don't say the following to be mean or to denigrate Gary. I am simply stating an observation. He looked really awful. Gaunt, drawn and puffy. Not the picture of health you'd expect him to be.

Anyhow, I strolled another few blocks uptown and went into his store. I got my Green Magma Health Boost Power Shake with added flax oil and aloe vera. Yum.

Attempting to digest the liquid, I strolled around the store. I saw that the woman behind the vitamin counter, Patricia A. Duncanson, CN was available for free nutritional counseling. Since no one was there, I asked her a question.

I told her I suffer from acid indigestion on a fairly regular basis. (NOTE: Even though I keep my carbs under 40 grams a day I still have issues with reflux. If you recall I mentioned Dr. Norman Robillard's book Heartburn Cured a few months back and what he says about carbs is true. When I was eating a lot of carbs years back my heartburn was FAR worse. Still, I suffer from it.)

Here's what Ms. Duncanson had to say.

She said that I must not eat wheat at all. I was impressed since there is ample evidence to support this advice. I told her I don't eat any grain at all in fact. She said Quinoa and millet was OK to eat, but I told her that to me eating that fare was like eating cardboard.

Then she said you must also cut out all meats. Yup. All meat. "Really?" I replied. "Yes!" she insisted. Her hands nearly flying off the counter at me for emphasis. I asked her why and she said "Did you know that all meats sit in your stomach for 4-6 hours and putrefy there?" "Really?" I said again. This of course is entirely untrue.

She then said that humans don't have the enzymes to eat meats of any kind. I tried to say something about cellulose being the substance that humans don't have the enzymes to digest but she was on a roll. She spouted out all kinds of notions on how long the human digestive tract was and that because of this we are designed to eat only plants and grains - like other herbivores.

Before I go on let me say that Ms. Duncanson herself was, like Gary Null, not exactly the picture of health. Is it just me or do other people notice how unhealthy vegans look? Why don't they themselves see this?

I asked her if she had any scientific evidence to support the claim that a piece of meat will sit in my stomach for hours completely impervious to hydrochloric acid and refusing to breakdown. She skirted the issue by saying that no animals are designed to eat meat. "Really?" I said for the 19th time. "Even lions?"

"Yes!" she asserted hands flying and then told me that if you follow biblical teachings you will discover that at one time before the great flood all animals ate grass and were all kind to each other.

"Really?" I said (again) and with that she said that the great flood wiped out all vegetation and this is why lions now eat animals.

I said "But there's grass on the plains now - how come they don't eat grass now?" Without a thought she said "Dogs eat grass when they are sick have you noticed that?" To this I said "Yes they do and they do this in order to make themselves vomit." This seemed to give her pause. But only momentarily.

"Well it's too late now they (lions) are used to eating meats." she said. Then she said that we see all kinds of diseases today caused by the ingestion of meats. Too frightened to go there, I asked her "Well, what about sharks? They never had a chance to eat grass in the first place." She froze for a second seemingly unable to form a response. Her eyes went kind of glassy as if looking right through me yet hating me at the same time.

Then her eyes came back to life and she said "Sharks eat a great deal of seaweed." "Really?" "Yes!" she said in a triumphant tone.

I could see that if I kept the conversation going, I might lose my mind. I decided to let her win.

So I bought the bottle of enzymes she suggested and went my merry way.

The saddest part of the entire  experience was, as I was paying for my enzymes a down trodden looking man walked up to her and said "Hi. My mother is dying of cancer. What can I do to help her?"