Some of you know that for years I studied martial arts. Since I was but a lad
I've been kicking, punching, rolling and flipping and my body has paid the price.

By the time I was 36 my knees and hips were in so much pain not to mention my thumbs and knuckles that I began to forget what it felt like to be pain free. I decided then to call it quits.

Now don't get me wrong - I loved it. I often took first place in inter-dojo (inter-school) Kata competitions as well as intra-dojo competitions. I wasn't a bad fighter either. I think people were afraid of me a bit because I look so much like Chuck Norris. 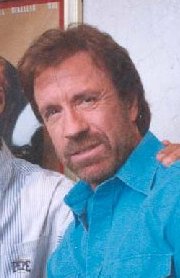 Anyhow, as the years have rolled on and after many hundreds of mistaken 'Are you Chuck Norris?' queries, my knees have finally started acting up again. Being severely bow-legged doesn't help matters at all.

I hate taking any kind of meds for pain. I know how bad they can be on the stomach. I tried glucosamine to no avail. The only thing that relieves the pain is a good Slow Burn workout. But it is a short lived relief.

A client (and friend) of mine from years past reemerged from his travels to China and France where he furthered his medical expertise by becoming certified in acupuncture and mesotherapy. He was an ER physician for almost 20 years and decided he wanted to give patients more direct care combining western medicine with holistic approaches. His name is Alexander Kulick, MD and he specializes in a pain management technique from France called mesotherapy.

Dr. Kulick told me all about this and I decided to give it a try. All I can say is WOW! After 1 session my knees were markedly better and now almost never have the searing pain they had before. It's been the best therapy I have ever had thus far - much better than the knee docs injections of Synvisc.

If you are in the NYC area and you have pain in one or more joints, you owe it to yourself to give Dr. Kulick a call. He's very thorough and spends a good deal of time with each patient sometimes on the order of over an hour per visit, listeneing and making holistic and western suggestions for total body health.