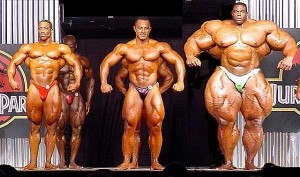 A favorite teacher in college once said to me: "The world is full of hacks." As I've gotten older and balder, I realize he couldn't have been more right. The world abounds with shills and sheisters.

This dude says he gained eight pounds of lean mass in one workout.

No he flippin' didn't.

Take a look at the video. In it you'll notice he is drinking a bottle of some sort of fluid between his sets. In that bottle is, more than likely, water mixed with sugar and creatine - a substance that helps shunt fluid into the cells.

What this fellow did was dehydrate himself before the workout and then by pumping himself up and drinking the magic fluid, he put on 8 pounds of water weight. Now, muscle is mainly water ~70% or so. But what he is implying in this video is that he put on eight pounds of muscle mass - at least that is what he gets you to think without actually saying so.

Please people - do not believe folks like this. They are charlatans and out to make a quick buck. They also ruin it for folks like me who tell you that gaining eight pounds of actual muscle/bone tissue is a long, hard process that in most men can take a month to achieve and in women twice that time if at all.

Be wary of people who tell you what it is you want to hear - in exercise and in life.