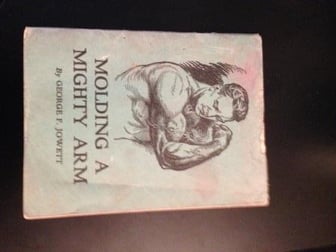 This little gem  Molding a Mighty Arm (copyright 1930) is part of my library collection of old and rare strengthening books. The author, George F. Jowett, was a turn of the century strength and physique guru.

As many of you know all too well, I often argue with other experts in the field of personal training and strength exercise. These passive and friendly FRED talks cover a myriad of issues but mainly over repetition speed or tempo.

Many experts belittle slow rep tempo training. Their main beef with it is that they think it cannot build much beef. This error in thinking is usually due to their misinterpretations of certain physiological principles of exercise.

Most of these arguments revolve around the misguided idea that lifting weights rapidly selectively recruits the so-called fast twitch muscle fibers and that slow reps don't. The fast twitch fibers are the fibers most responsible for hypertrophy (muscle growth) and strength.

But the idea that slow reps don't tap into or recruit the FT fibers is untrue. Muscular contractions obey what is known as Henneman's Size Principle. From Wiki:

The speed with which you lift a weight is not a factor in determining what fibers are called upon to contract. What matters is the amount of force and the degree of effort one generates. In other words, the greater the effort you put forth and the harder the effort becomes, the more likely you are to engage the fast twitch fibers.

When a set of any exercise is taken to complete fatigue, the effort is the greatest. All types of fibers - both fast and slow twitch - are recruited. If you train to complete fatigue using ANY rep tempo, you will recruit the fast fibers. But explosive reps have the unfortunate side effect of screwing up your joints but good.

This is a snippet from inside the Jowett booklet. Look at the LAST sentence. Ancient wisdom: 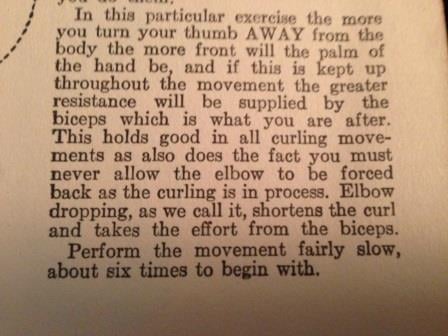 He means six times to fatigue to begin with and build from there.

Now, what does he mean by "fairly slow"? We just don't know. But he didn't say to perform the lift explosively as many experts suggest today. You'll also notice if you read the whole snippet that he ain't too keen on cheating.

Much of the information you hear today on weight training is dangerous fast-speed nonsense that will leave you injured (Crossfit, Parkour, plyometrics, etc.) and with less total strength and muscle mass than you might otherwise enjoy. F=ma peeps.

If you find yourself talking to a trainer who tells you to lift weights quickly and explosively or tells you that you have to move rapidly and violently in order to build and develop strength and muscle mass, smile and walk away. You are talking to a very misinformed individual or, as my grandfather would have said, "a schmuck."