Whither Did I Go?

Last week starting on Sunday, I was viciously attacked by some nasty germs that defeated my immune system and made me feel like a ball of phlegm. This is rare for me.

I laid low for 2 days and sweated out the illness. And when I say sweated, I mean sweated.

What was interesting was I had an appetite. I ate, as usual, never missing a meal. Not one. I even craved pizza one day and ate three huge pieces that had added sausage, hamburger, cheese, artichokes and mushrooms.

I drank tea like it was going out of style but my body shivered and sweat gallons more than I could take in.

Stepping back: On Thursday of last week I had a great, hard, taxing strength workout. The week before I had one of the best body composition readings of my life. Here it is below (I left it big so you can see it better): 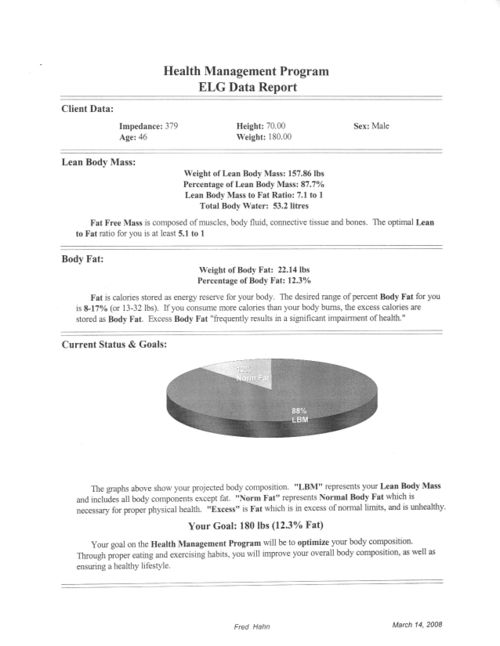 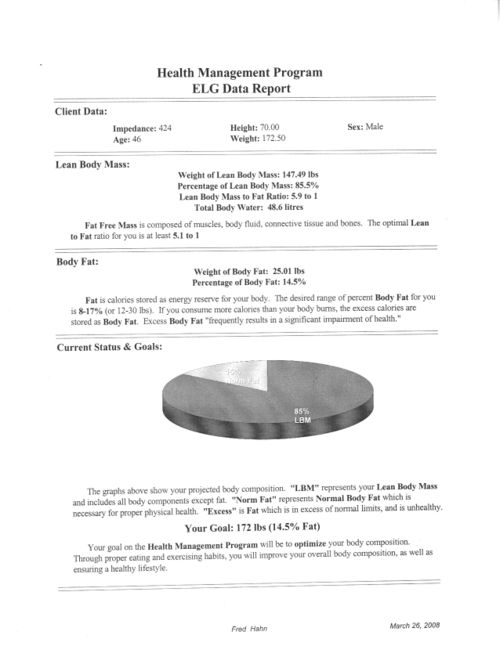 UH oh - whither did I go? A mere week and a few days later it appears I have gained 3 pounds of fat and lost 7 pounds of muscle! Egads! Can this be possible?

In short, no. I bring this up because water loss can be quite deceiving and unnerving to those who don't understand the inner goings on of weight loss.

As I mentioned earlier, being sick and sweating my sheets into liquid, I lost huge amounts of water weight. And look at the water differences. Before I had 53.2 litres of body water. (The machine is a bioimpedence machine that uses an electrical current to measure body water.)

After my illness I had a mere 48.6 litres of water.  A litre of water weighs ~2.2 pounds. If we do the math we see that I lost 10.2 pounds of water. Almost exactly the amount of lean mass lost.

What I effectively did was shriveled my muscle mass into beef jerky - I dried it up but didn't lose much if any actual muscle tissue.

The fat gain of 3 pounds (22 to 25lbs.) is the difference (in the scale weight). Since I lost 10 pounds of water and only 7.5 pounds on the scale, it had to make up the other 3 pounds somewhere and did so by adding fat weight. This particular reading baffles me a little as I clearly did not gain fat. But none of these devices are absolutely perfect.

The moral of this tale is the scale all by itself can be a booby trap. Water loss can make you lighter - a lot lighter - yet at the same time not really mean fat loss - or muscle loss.

So don't depend on the scale alone to judge fat loss or gain. Always try and keep your water intake consistent and plentiful.

Buy a pair of skinny jeans (or slacks) - the ones you'd LIKE to wear and try them on every week. (If you stretch them, wash them back to tightness). This is one of the best ways to judge progress or lack thereof if the scale is your only measure of progress.