Why Is Your Kid Fat? 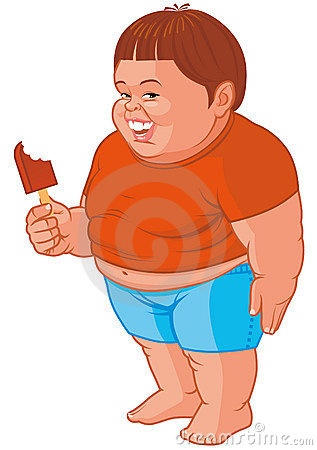 There is no doubt that the surge in adolescent obesity is real. As a father of two wonderful young lasses, I am in their school yards virtually everyday and see it first hand. I will say however that, at least in New York City, most kids appear to be of normal body weight. The truly obese kids - the ones who need immediate care - are rare.

In my book Strong Kids, Healthy Kids: The Revolutionary Program for Increasing Your Child's Fitness in 30 Minutes a Week

(affiliate link), I discuss the relationship between physical activity and obesity. I spent a year researching the issue and could not find any evidence that obese kids are less active than lean kids. None. I discussed this at length a couple of years ago with Oprah Winfrey's trainer Bob Greene. The idea, it seems, is a myth. A wive's tale. Or as my friend Tom Naughton puts it, a load of bologna.

The fact is that there are many active obese kids and many lean inactive kids. I'm here to tell you people, physical activity - or the lack of it - has absolutely nothing to do with whether or not your kid is lean or fat, short or tall. So sorry Michelle, I know you mean well but your Let's Move organization is misnamed. It should be renamed Let's Eat Less Sugar.

Speaking of eating, kids need to eat and they need to eat as much as they need. Cutting back on their calorie intake will also cut down on their nutrient intake. They are also growing. So, the other commonly cited solution to obesity - eating less food - is certainly not the right way to go about helping a child to lose fat. So what is?

OK, here's the solution to adolescent obesity: Cut the carbs, up the fat.

That's it. Keep cutting the carbs and replace those calories with fatty animal matter like salmon, steak, eggs, duck, etc. until the child is lean. Even if you are a staunch "lipophobe" who believes the propaganda that eating fat and cholesterol directly cause heart disease, aside from medical issues, have you ever in your life known a person who gradually went from obese to lean but became less healthy?

On the Let's Move website under the heading Eat Healthy is says the following:

Nutrition Information
The Dietary Guidelines for Americans, put forth by the U.S. Department of Agriculture (USDA), provide science-based advice for individuals over the age of two to promote health and reduce the risk of major chronic diseases. The current Dietary Guidelines, encourage most Americans to eat fewer calories, be more physically active, and make wiser food choices.

Science-based? I don't think so.

A while back I blogged on this issue and made the point that, if the food pyramid was actually science based, would not fruits and vegetable be placed at the bottom of the pyramid or given the new design (see above), get the largest slice of the pyramid pie? After all, fruits and vegetables are more nutrient dense (by far) and provide much more fiber. Not that fiber is as important as the USDA claims it is but if it were, grains don't hold a candle to veggies in terms of fiber content.

So this alone proves that the pyramid is by no means science-based.

On top of this, meats are the most nutrient dense of all the foods yet as foods go, they are given the smallest slice of the pie. They are also lumped together with beans for some strange reason. Why aren't beans in with vegetables and fruits? After all, they're plants. I just asked my wife this question and she said maybe because they are so starchy and starch is so fattening. Good point but then, why aren't they at the bottom with the other fattening starches?

Perhaps because they have protein? But broccoli has protein too.

Meat AND beans. Kinda weird if you ask me and certainly not scientific.

Where's the nuts and seeds?

Here is a pyramid that is far more science based:

Follow this pyramid and if you are obese, you will no longer be so because you're health will improve markedly. Eating like this also prevents obesity. In fact, you could not become obese if you tried eating according to this pyramid. No need to do silly things like count calories eating like this either.

So, parents, caregivers, grandmas, grandpas, aunts, uncles, and other people who influence and control how a child eats, alter how you feed young Jane and Johnny to this way of eating and you'll be glad you did. Not only will the child you care for become healtier, she'll sleep better, think better, play better and one day if she has children, pass this way of eating onto her progeny.

In a single generation we could see obesity vanish and the lives of people flourish. Think of how productive this world could be!