A Calorie Isn't a Calorie. But Colpo Remains Colpo. 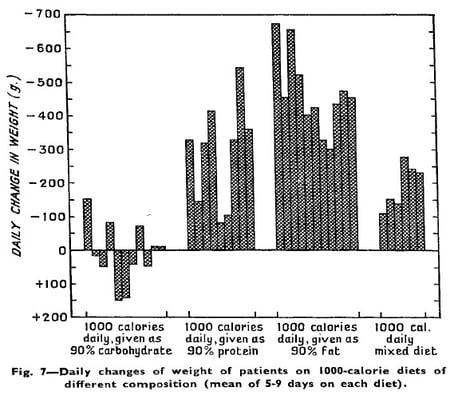 See! A calorie IS a calorie - NOT.

The above chart is taken from the infamous 1956 study by Keckwick and Pawan. Their paper is just one of the many papers that does a very good job of showing that calories in is not, by any stretch, the total story of how we gain fat.

A recent study by Ludwig and colleagues supports these findings via a different experiment. It is a never before tried experiment according to Gary Taubes and many are singing it's praises.

However, the verbally colorful personal trainer Anthony Colpo doesn't agree. He blogged on it and, according to him, the paper doesn't add to the growing body of evidence that low-carb diets offer a metabolic advantage to fat loss. Or by inference, the ingestion of different types of calories (protein, fat and carbohydrates) do not affect our hormones differently. In other words, to Colpo, there is no advantage to fat loss by eating a low sugar/carb diet over say a low fat high carb/sugar diet. To him, fat loss or gain is essentially a matter of calories in/out and that there is no metabolic advantage to low-carb diets at all.

Talk about living in the stone age.

In the blog, Colpo (referred to as AC from now on) was alerted by a fan of his that Dr. Eades applauded this study by tweeting about it. He poked fun at Dr. Eades by saying that "real men don't tweet." I noticed that for some time now, AC hasn't allowed comments on his blog. I'd like to state for the record that real men allow blog comments.

I won't get too into how wrong AC is on the entire subject. I do want to point out how incorrect he is with respect to the cortisol/CRP issue in the study which he believes were raised to heart attack, muscle wasting levels in the low carb group. An epic fail in thinking if you ask me.

If heightened catabolism and inflammation constitute an ‘advantage’, then I’ll give it a miss, thank you. I’ll stick to my highly disadvantageous regimen of intelligent nutrition and regular exercise that sees me maintain with minimal fuss the kind of single-digit bodyfat levels most low-carb devotees will only ever be able to dream about.

How humble. The logical fallacies he commits here boggle the mind. So you're lean - so what? I have friends who eat crap all day and are lean. It's entirely beside the point.

And sorry AC, none of the groups experienced any abnormal increases in CRP levels including the low-carb group. CRP is a measure of systemic inflammation. As for cortisol, a stress-related hormone, all levels in all groups were well within the norms.

The researchers state in their discussion (the bolding is my doing):

Highest yes, but high? Heck no.

What they don't say, for whatever reason, is that none of the levels measured for CRP or cortisol reached abnormally high levels. Not even close. The levels in ALL groups were well within the norms. Heightened catabolism AC? Poppycock. In fact, all groups saw a significant improvement in their CRP levels, with all groups falling into the normal range, which neatly tucks them into the low risk category for CRP / cortisol measures.

It's literally insane for the researchers to say "We identified 2 potentially deleterious effects of this diet..." especially considering the statement that I bolded above. As I see it, the researchers, as well as AC, want to make something big out of absolutely nothing. You can almost smell their disdain for the low-carb hypothesis.

Here are the CRP facts:

Cortisol (below 100 is considered normal):

Maybe AC and the researchers should read the study before talking about it.

AC also points to a study by Miyashita and colleagues which he calls the "knock-out punch" to the low carb metabolic advantage hypothesis. Really - the knock-out punch?

Considered by many to be a flawed metabolic study, it actually shows a bunch of metabolic advantages to a low-carb diet. It's true that it didn't show significant differences in weight loss. And this is interesting. But in just over four weeks, it's certainly nothing close to a knock-out punch.

These results suggest that, when restrict diet was made isocaloric, a low calorie/low carbohydrate diet might be more effective treatment for a reduction of visceral fat, improved insulin sensitivity and increased in HDL-C levels than low calorie/high carbohydrate diet in obese subjects with type 2 diabetes mellitus.

Hmm. If this paper is what he considers a knock-out punch to the low-carb metabolic advantage, AC must have a glass jaw.

Getting back to the cals in/cals out issue, last I checked our stomachs don't "burn" food the way calories are burned and calculated by burning food in a calorimeter. The digestion of foods is a complex process. How our bodies manage all that is mind-boggling. But don't be fooled - it is not nearly as simple as "eat 500 calories less per day than what you need to stay at your current weight and you'll lose a pound of fat in a week." No siree.

I'll use the same pic that AC did:

Enzymes and hormones regulate/control how we gain fat, lose fat, gain muscle, lose muscle, on and on and on.

In the group fed the amount of calories but less protein than they required, they all LOST weight.

In table 4B, protein was once again lower than what the subjects required, but this time from eggs. Lo and behold, the group fed the amount of calories that was supposed to be a maintenance level, all LOST weight. The group fed excess calories did gain weight as did the subjects in the rice protein group but the gain was not statistically significant. One of the six lost weight with excess calories with low egg protein.

But hey - there must be something wrong with all these papers because, like Anthony Colpo keeps screaming from down under, there is no metabolic advantage to low-carb. All calories regardless of the type will make you fatter or leaner only due to the total amount that you eat or burn off.

In this paper, It demonstrates that as long as carbs are restricted, overfeeding fires up the machinery to burn/use fat in basically the same way caloric restriction does.

Perhaps Colpo would enjoy reading and hopefully understand this blog by Dr. Richard Feinman, a man that Colpo lumps into what he calls the MAD men (metabolic advantage dogma) believers. But it's not a matter of belief as you can see from the above evidence. It's a matter of fact.

When ingested, a calorie isn't just a calorie. Or perhaps it was best said by Dr. Jeff Volek: